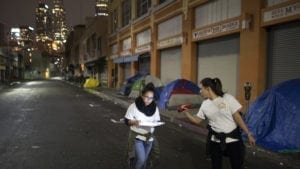 San Francisco officials continued their ongoing struggle to combat the region’s escalating homeless crisis this week; unveiling a new “tracking system” that would identify every “homeless man, woman, and child” living in the city.

According to Business Insider, local authorities are poised to launch the program in an attempt to “crack down on the city’s very visible homeless crisis.”

Recent statistics show the Bay Area has an estimated homeless population of 7,500.

“The new system intends to track the health, housing, jail, and counseling history of every homeless person in the city,” writes Business Insider. “The final product allows homeless outreach professionals to log in to an app and view the state of homelessness in the city in real time.”

“I know it’s going to make a difference,” said Jeff Kositsky, the head of San Francisco’s Department of Homeless and Supportive Housing. “Maybe not right away, but it will happen.”

About The Sean Hannity Show